The 2010 Impossible Panther AR was held June 19-20. The event started at 8pm on Saturday and ended at 10 am on Sunday, giving racers a chance to race overnight, albeit on one of the shortest nights of the year. The weather was in the mid-90’s with oppressive humidity, so making it a “night” race turned out to be a lucky decision.

The course consisted of three main sections. The Wood Run Area contains a number of gravel and dirt roads, as well as the Wood Run Mountain Bike Trail system, which provided a great biking area. Morrow Mountain State Park has been mapped for orienteering, so it offers a great area to navigate on foot. Tying these two areas together has been done before, but always from the north side. This time we obtained permission to start and finish the race from the Lake Tillery Volunteer Fire and Rescue facility, located south of the other two areas and on the shore of Lake Tillery. This location gave us immediate access to the lake and a quick 2 mile road ride to the Wood Run trailhead. Morrow Mountain State Park could be accessed from the lake, so we built a paddle section on the lake itself.

For safety and legal purposes, travel along or even across public roads was restricted to a single corridor from the Start/Finish location to the bike area trailhead. All other travel would have to be within the bike area, the state park, or on the lake. This restriction essentially divided the course into two sides, a bike section and a paddle/orienteering section. Within those sections, teams were free to choose their own route to the CP's.
Keeping with Bushwhack Adventures’ preference for rogaine events, teams were allowed to choose whether to bike first or paddle first. All 30 checkpoints were optional, and they were weighted in value. The full course was worth 1400 points. Teams received two maps at check-in: a 1:24,000 topo map, and a 1:15,000 orienteering map. The passports, with UTM coordinates for the CP’s, were not given out until the start of the race. The location of the CP’s for the orienteering section had to be copied from a master map, which was not available until the start of the race, to each team’s orienteering map. The weighted point values for each CP were also on the passport, so teams had to plot the CP’s and figure out their race strategy “on the clock”.
Sixty-one racers, making up twenty-two teams, assembled at the start line at 8:00 pm. By design, there was no clear “best strategy” to approach the course, so we were curious to see what teams would choose to do first. Twelve teams chose to bike first, and ten teams headed for the lake first. The first team left the Start area on bike at 8:15 pm. The last team paddled out at 8:37 pm.
Team TBD, a 2-male team, was the first team to return to the transition area. They had been the first team to head out on bikes. They “cleaned” the first section, finding all CP’s there. They reported a “complaint” (the CP’s were too easy to find), and a “compliment” (the singletrack riding was great!). Team TBD then headed out on the lake at 12:17 am. The “complaint” worried the RD’s a little, but no one else reported that issue with the bike CP’s. Teams Northern Lites and the VA Mountain Men, two 3-male teams, were the next teams to return from the biking side of the course, at 1:26 am and 1:41 am respectively. Both of these teams had also cleaned that section.
Of the teams that chose to paddle first, the first to return to the TA was Live Free Or Die, a 2-coed team. They returned at 4:27 am. They had not cleaned the paddle or orienteering sections but were managing their time to be able to work in some of the bike section as well. Team Appalachian AR, a 4-coed team, returned next at 4:48 am, having cleaned all paddle and orienteering points.
Only one team managed to entertain the TA staff by inadvertently rinsing out the inside of their canoe at the launch. We’ve heard they may rename their team to “Tippecanoe and the Thirsty Turtles Too!”
All teams but one made it back to the Finish before the cutoff time of 10:00 am. Team VA Mountain Men was the only team not there at 10 am. The late penalty was 10 points per minute, which would add up quickly. At 13 minutes after, they were spotted paddling their canoe around the bend into the long cove leading to the Finish. Cheers from the volunteers, spectators and other racers spurred them on as they pushed all the way in. They crashed into shore and nearly fell out of the boat as they struggled to regain their land legs. A little extra teamwork was needed as leg muscle cramps nearly took Earl out in the last 20 yards to the finish table. VA Mountain Men turned in their passport at 10:18 am. They were late but they had found all CP’s. Even with losing 180 points to late penalties, they had enough points left to take second place in the 3&4 male division.
Out of 22 teams, four teams cleaned the whole course: TBD, Appalachian AR, Northern Lites and VA Mountain Men. Ten teams scored more than 1000 out of the possible 1400 points.
Team Teamupfortype1.com (3-coed) took first place in the combined 2&3 person Coed division. They were followed by teams GoBushwhack.com and Will Race for Food.
Team Appalachian AR took first place in the 4 person Coed division, followed by teams Isotopes and My People Don’t Run.
Team TBD took first place in the 2 person Male division, as well as first place overall. Teams Mudslingers and GungHo followed in second and third place.
Team Northern Lites (3-male) took first place in the combined 3&4 person Male division, adding another top finish to Northern Lites' record in Uwharrie races. They were followed by teams VA Mountain Men and Blackout.
A post-race brunch of Bojangles biscuits, bagels, muffins, fruit, boiled eggs, juice, Gatorade, and soft drinks was served. Racers were told they could go jump in the lake, and several of them enjoyed doing just that!
Posted by GoBushwhack.com at 6:00 PM 1 comment:

Thanks to everyone who came out to race or volunteer at the IPAR10!

Special thanks also to the folks at Lake Tillery Volunteer Fire and Rescue who let us use their facility and helped with setting and picking up the course!

Race pictures from Chris Baker (teamupfortype1.com supporter).
Posted by GoBushwhack.com at 4:49 AM 2 comments:

Anyone still looking for another teammate? Or a team to join? Post a comment below and let others know you're looking.

I hear there is an experienced navigator and RD looking for a team to race with. Anyone want to add him to your team?
Posted by GoBushwhack.com at 6:46 PM 3 comments:

With a only a few more weeks until race day (or night), I want to share a few teasers with you related to the upcoming Impossible Panther AR. You already know the course will be an overnight course. Since we scheduled this event for June 19-20, you'll have about as short a "night" as possible at this latitude. You should have at least 7 hours of real darkness during the race - maybe more if it's overcast.

The start finish location will be different from previous IPAR's. We've narrowed it down to two locations and are awaiting final negotiations before we pick one and announce it. These two spots are about 400 meters apart, so it won't affect the overall course very much.

If you did the math, you'll notice that our time estimates add up to 14 hours. We expect the fastest teams to clean the course in less than 12 hours, but there were so many cool spots we wanted to include, we decided to stretch the time limit to 14 hours so more teams could enjoy and clean the entire course. 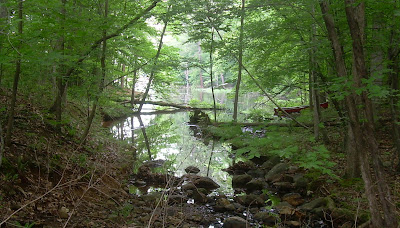 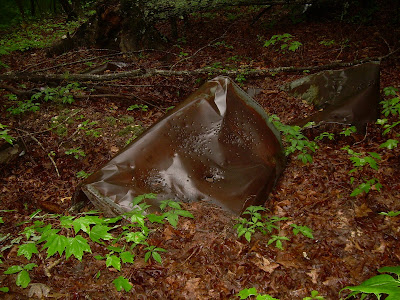 I'd have more pictures from the course to share, but it was raining so hard most of the day on Monday that I didn't want to pull the camera out. Hopefully you'll have better weather during the race!
If you haven't signed up to race, register now!
Posted by GoBushwhack.com at 7:18 PM 8 comments:

Welcome to the Impossible Panther AR for 2010!

Welcome to the Impossible Panther AR website! Those of you who have been adventure racing in NC for several years may be familiar with the IPAR from past events. In 2010, the IPAR will be a 12 hour overnight sport length adventure race!
The 2010 version of the Impossible Panther AR will be good for intermediate adventure racers to hone their night nav skills, but it will be doable for new racers as well. What could be more fun than riding, paddling, and trekking with a few friends through the night to find your way to the checkpoints?
If you haven't already signed up as a Racer on the Checkpoint Tracker website, do it now. Once you and your teammates have completed the free registration, you can create your Team and add the Impossible Panther AR to your Team Schedule. Registration for this event will be processed through the Checkpoint Tracker website.
Check back soon for more details!!
Posted by GoBushwhack.com at 8:18 PM 3 comments: